This year Sephora ran an awesome promotion that I’d like to share with you.  The campaign turns virtual tote bags into a word of mouth marketing promotion that generates revenue while boosting their brand image at the same time. 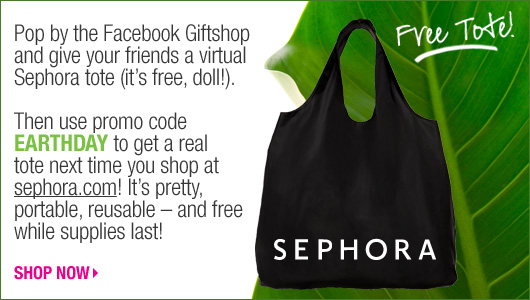 With the help of Facebook’s Gift Shop, Sephora launched a Facebook campaign that promotes a tote bag giveaway in honor of Earth Day.  Users can send the virtual tote bag to their friends that will give them a code to redeem the real thing through Sephora.com.  The virtual tote bag campaign achieves two great things.  First, this type of promotion is viral. The promotion can spread like wildfire through word of mouth on Facebook and aligned social media outlets.  Second, it makes money.  By offering a limited edition tote bag that is redeemable with a promotional code from the virtual gift, the campaign’s effectiveness is directly measured to every marketer’s delight!

Another benefit with the promotion include the positive brand equity that assoiciates Sephora with a good cause, Earth Day.  Sephora reaches a growing segment of people who seek organic, natural goods.  This segment is keenly aware of Earth Day and supportive of companies that share the values of the Earth Day movement.  With these product lines highlighted, Sephora can reach a new market that I suspect doesn’t generally associate Sephora with natural products.

If Sephora really wanted to push the envelope, I would suggest they provide an additional incentive for becoming a fan of Sephora’s Facebook page so the campaign has a lasting effect of driving traffic to Sephora.com. One good strategy to recruit more fans would be to ask users to post a photo, which requires you to become a fan, in order to get an additional percentage off their purchase or some other additional incentive.  This would allow them to continually promote future campaigns more easily and allow their evangelists to continually evangelize the Sephora brand.

With over 100,000 fans so far, Sephora’s Facebook marketing strategy has been very fruitful.  Retailers could learn a thing or two by monitoring their strategy and emulating the things that work.

This site uses Akismet to reduce spam. Learn how your comment data is processed.